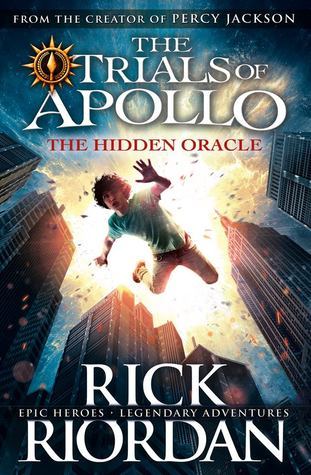 How do you punish an immortal? By making him human. After angering his father Zeus, the god Apollo is cast down from Olympus. Weak and disoriented, he lands in New York City as a regular teenage boy. Now, without his godly powers, the four-thousand-year-old deity must learn to survive in the modern world until he can somehow find a way to regain Zeus’s favor. But Apollo has many enemies—gods, monsters, and mortals who would love to see the former Olympian permanently destroyed. Apollo needs help, and he can think of only one place to go… an enclave of modern demigods known as Camp Half-Blood.

In short: This book had so many elements that made me fall in love with the PJO series, but I don’t mean that in a carbon-copy way. If you’re a Percy Jackson fan I can not recommend this enough and if you haven’t read Percy Jackson then please, please change that. I also recommend you read both the Percy Jackson and the Olympians and The Heroes of Olympus series before reading this book because it will spoil a lot of things for you and you’ll probably be really confused.

This review contains no spoilers for The Hidden Oracle but it does contain minor spoilers for the Percy Jackson and the Olympians and The Heroes of Olympus series.

It’s going to be really hard for me to try and be coherent in this review because honestly the best way to explain my thoughts would be continuous keysmash and screaming. Rick Riordan is one of my favourite authors. I love the world of Percy Jackson as much as I love the world of Harry Potter. It also may be a bit vague and short because I want to make it as non-spoilery as possible and that’s not always easy.

Unlike the other books in the Percy Jackson world, The Hidden Oracle allows us to be in the head of a God instead of a Demigod. Apollo, the Greek God of the sun, prophecy, music and healing, has gotten in a bit of trouble with his dad (aka Zeus) and as punishment has been sent down to Earth to experience life as a teenage mortal.  To say he’s a little annoyed about his current predicament is an understatement. In The Hidden Oracle we get to see Apollo face trials (see what I did there 😎) and mishaps on his journey to Camp Half Blood and to find a way to become immortal once again. Along the way Apollo, whose ID now reads Lester Papadopoulos, befriends a fellow mortal Meg and encounters some familiar faces along the way.

I know a lot of people were disappointed with The Sword of Summer (Magnus Chase and the Gods of Asgard #1) because they said that Magnus was just Percy with a different name. Whilst I didn’t necessarily have that same thought, I can see why others would, you do not have to worry about that WHATSOEVER with The Hidden Oracle. Percy and Apollo are on two opposite sides of the spectrum. Anyone who’s familiar with the Percy Jackson books will know that Apollo was always endearingly egotistical and maybe even overly confident. I saw a review on Goodreads, by Emily May, who refereed to Apollo as “the Gilderoy Lockhart of this world” and I have to say I completely agree.

Apollo does not lose any of his Godly personality and it’s evilly amusing to see him struggling with mortality. The way Rick manages to make Apollo keep his Godly, centuries old voice whilst having him fit in this teenage world is amazing. Apollo is selfishly hilarious, totally unapologetic and it is fantastic being in his head. I guarantee you will spend 70% of this book laughing and the other 30% wanting to cry.  All that aside, the journey that Apollo goes on character development wise is absolutely incredible. It wasn’t rushed and was so believable and despite learning and growing he still has his Apollo charm so you don’t need to worry about him losing that! By the end of this book I felt like a proud parent.

“Zeus needed someone to blame, so of course he’d picked the handsomest, most talented, most popular god in the pantheon: me.”

I absolutely adored the friendship between Apollo and Meg. To start with it is so good seeing platonic friendships in books. Like Apollo’s character development, the development with Meg and Apollo’s friendship is fantastic. It made me all kinds of emotional. Meg may appear annoying at first, but along with Apollo you eventually grow to become extremely attached to her. She is actually quite a refreshing character. People with younger siblings will definitely be able to relate. Sometimes you want to kill them, but you would also kill for them. Seeing Apollo interact with the other Camp Half-Blood demigods is even more amazing than I imagined – especially with his children from the Apollo cabin. There’s also some relationships in here that I am dying to talk about, but I won’t because spoilers.

I can’t say too much about the plot without spoiling absolutely everything, but it was just really interesting to see this world through the eyes of a God. We learnt a lot more about the Oracles and it was so interesting. There was even talk about the Roman side of things. In the previous books we’ve focused on evil gods and giants and titans, but this brings in a whole new field of play and I was not expecting it in a million years. We also get to visit new locations and revisit old ones. I couldn’t stop reading because everything was just so fast paced and there were so many twists. I needed to know what happens. Like always Rick manages to balance the line between humour and seriousness so perfectly.

All the new characters we met are brilliant too. There’s a certain Titan that makes an appearance that made me really excited. All the new Camp Half-Blood kids fit in so well and it was just as awesome seeing new faces as it was old ones.

This book also bought up some extremely important issues and whilst they are minor spoilers they are too important not to talk about. Like, this is so, so important and I am so, so happy. I didn’t think it was possible for me to love Rick more than I already did, but then he wrote this book. This doesn’t spoil anything for the plot, but it does spoil some information about the characters and what familiar faces show up. It also spoils some relationships that develop at the end of The Blood of Olympus.

Since there’s no aesthetically pleasing way to do spoilers on WordPress.com without upgrading your account I put the spoilery discussions on a page of its own. Click this text to go there!

“Of course, even without my help, other forces would keep the cosmos chugging along. Many different belief systems powered the revolution of the planets and stars. Wolves would still chase Sol across the sky. Ra would continue his daily journey in his sun barque. Tonatiuh would keep running on his surplus blood from human sacrifices back in the Aztec days. And that other thing—science— would still generate gravity and quantum physics or whatever.”

As I mentioned above in my “In Short” section The Hidden Oracle contained so many of the same elements that made me fall in love with the Percy Jackson and the Olympians. Don’t get it twisted, this is not a carbon copy. It has it’s own unique voice and is so different to anything Rick’s written despite being from the same world. It just has all these little things that I feel were lacking in The Heroes of Olympus and Magnus Chase. I felt so nostalgic and happy reading this. It’s like I was right back there reading The Lightening Thief for the first time.

Overall, I had extremely high expectations for The Hidden Oracle and it managed to exceed each and every one of them. It was everything I wanted and more. Rick manages to write this world so vividly and you become completely immersed. I actually felt like I was right there at Camp Half-Blood going on this quest with Apollo. Another fun thing is that the chapter titles are all Apollo’s (dodgy) haikus. I NEVER wanted this to end and I still have a major book hangover from it. I can not wait to read the next book in the series and see where Apollo and Meg’s journey takes them. Is it 2017 yet?

If you’ve read or are planning to read The Hidden Oracle I would love to hear your thoughts!

19 thoughts on “Used to be Goddy, Now Uptown Feelin’ Shoddy // Review: The Hidden Oracle (The Trials of Apollo #1) by Rick Riordan”