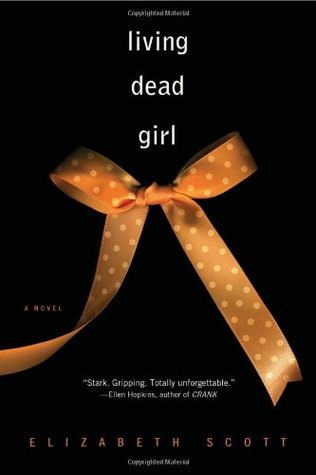 The thing is, you can get used to anything. You think you can’t, you want to die, but you don’t. You won’t. You just are.

This is Alice.
She was taken by Ray five years ago.
She thought she knew how her story would end.
She was wrong.

I often start my reviews by saying, “I’m not quite sure how to review this” but when I say this about Living Dead Girl I truly mean it. This is one of the most upsetting and disturbing books I’ve ever read.

I added Living Dead Girl to my TBR on Goodreads years ago so when I found it out a local library sale for 50c I bought and read it right away. I knew nothing about this book other than the vague blurb implied an abduction and that its Goodreads reviews all talked about how creepy it was. I presumed it would follow a similar pattern to most YA books that deal with this subject and having read one of Elizabeth Scott’s other books Bloom (which was quiet terrible) I wasn’t expecting much. I couldn’t have been more wrong.

The plot centers around a girl named “Alice” who was abducted by a man called Ray five years ago when she was a child. We see Alice’s day-to-day struggles having to deal with Ray’s physical and emotional abuse. Ray decides Alice is no longer young enough and sets her a task to abduct a new girl and everything spirals from there.

You will feel so many emotions reading this book. Even if you’re not an empathetic person it’ll be hard not to – at some stage in this book – empathise with Alice. This book will break your heart.

The thing that hit me the hardest with Living Dead Girl was how utterly realistic it was. I felt like I was reading somebody’s personal memoir. A lot of times these themes can be romanticised or used for shock value, but this book was like someone poured their heart and soul into writing about an experience they actually went through. Elizabeth Scott handled these subjects as brilliantly as someone could when dealing with such sensitive topics. I normally love dark books and it takes a lot to get to me, but boy did this book get to me. It was extremely confronting and brutal. As much as we don’t want to think about it awful things like this happen all the time and we are all blissfully oblivious and unaware. This is highlighted by the opening paragraph were we’re in the point of view of a random inhabitant of the complex where Ray and Alice are who just presumes Ray is Alice’s father and that Alice is his “ungrateful” teenage daughter.

“I don’t understand why my shell keeps living. Breathing. Why won’t it listen to me, to the little part I have that isn’t Ray, to that tiny once upon a time girl who just wants to close her eyes and never wake up again?”

Living Dead Girl is more a character study on victims and their attackers. We really get into the mind of Alice and feel everything she feels. Ray allows Alice to leave their appartment as long as she follows the rules he gives her. He threatens that he’ll kill her parents if she doesn’t listen. As a reader you may be frustrated by the amount of times Alice is able to seemingly rescue herself from the situation she’s in but doesn’t. I actually appreciated this though because I think people underestimate the power of emotional abuse and in Alice’s case it’s been amplified by Stockholm Syndrome and physical/sexual abuse. Ray has told Alice over and over again since she was a child that if she doesn’t obey him her family would die. Her believing him is heartbreakingly accurate.

One of the saddest things, besides having to witness all the trauma Alice goes through, is seeing her will and strength constantly build up and then be broken down. She’ll start feeling determined about escaping, but then of course the years of abuse she’d suffered comes back and she will shrink down and admit defeat. Or, on a more confronting sense of strength she’ll wish for death and want Ray to kill her, but then she’ll give up on that too.

“I am the living dead girl because I am too weak to die.”

It seems wrong to talk about this book in a technical sense, but despite the lack of plot the chapters are all really short and so fast paced that it’s impossible not to read this book in one sitting. The writing is poetic, but done in a way without romanticising the situation. I know some people have a problem with the abuse that Alice suffers being “too” descriptive, but someone who has experienced this thing in real life didn’t have the privilege of having them sugarcoated so why should we? I understand people’s concerns when abuse is used as a plot device and in that sense I agree, but with how realistic this book is it was definitely justified.

My review is shorter than usual because there’s nothing else I can really say without giving away the ending. This book is not an easy read. No review or anything I say will even be enough to prepare you, but if you can deal with these subject matters I can’t recommend it enough. One of the reasons this book affected me so much was because I have young siblings and the thought of this happening to them made me feel sick. Then I remembered that these thing have happened to someone’s sibling or child or friend. Just because these issues are confronting and truly awful doesn’t mean we should forget they exist or not talk about them. I appreciate Elizabeth Scott for talking about this in a way that was respectful and realistic and making 170 pages hit me harder than any other full length novel that I’ve read. There is no way I can give this book any less than 5 stars.