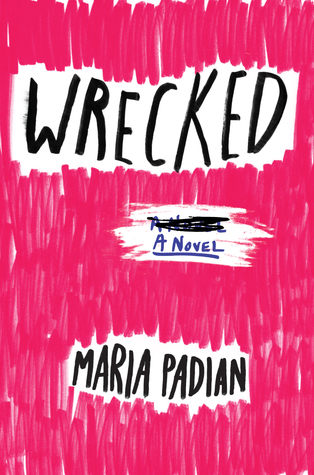 Everyone has heard a different version of what happened that night at MacCallum College. Haley was already in bed when her roommate, Jenny, arrived home shell-shocked from the wild Conundrum House party. Richard heard his housemate Jordan brag about the cute freshman he hooked up with. When Jenny formally accuses Jordan of rape, Haley and Richard find themselves pushed onto opposite sides of the school’s investigation. But conflicting interests fueling conflicting versions of the story may make bringing the truth to light nearly impossible–especially when reputations, relationships, and whole futures are riding on the verdict.

I received an copy of this via Algonquin Young Readers and Netgalley in exchange for an honest review.

Wrecked focuses around a girl named Haley who comes back to her dorm to find her roommate Jenny in an emotional state. Jenny reveals to Haley that she was raped by another student, Jordan. Through a series of events Haley meets a guy named Richard who just so happens to be Jordan’s roommate. Both Haley and Richard are involved on opposite sides of the investigation and Wrecked follows as they struggle to deal with what is happening around them.

I read this book a while ago and I’m still not sure I can properly articulate my thoughts on it. Just setting this post up has brought back all the emotions I experienced whilst reading which was mostly anger. Not because the book was bad or did an awful job portraying rape, but because it was so devastatingly realistic to what has happened so many times in society.

I really enjoyed the writing style in Wrecked, between each chapter that alternated in view points of Haley and Richard, we’d get a flashback to the night Jenny was raped. I felt like it was definitely the strongest point of the book. Normally I love Multi POVs, but in this book I found myself just wanting to get to the flashbacks or the chapters were Hayley was with Jenny.

I really loved Jenny as a character. I admired her strength. I appreciate that Maria Padian didn’t make her into the stereotypical Strong Female Character. Jenny went through a wide range of thoughts and feelings throughout the book which was completely understandable.

For me personally, Haley and Richard were not likable characters. Haley was extremely selfish at times and Richard was nearly always a misogynistic asshole who would even at times make rape jokes. He may not have necessarily been on Jordan’s side, but that doesn’t excuse his actions. He only had a smidgen of character development by the end of the book. I know it can’t have been easy for Haley to know how to handle what Jenny was going through, but she constantly acted like what she was dealing with was worse. There was another character, Carrie, who was a feminist (and who I thought was the only character who made any sense) and the way she was treated really bugged me. She was Richard’s ex and both he and Haley were quite awful to her. In fact, Richard met Haley whilst he was following Carrie around because she broke up with him. Talk about creepy. Haley and Richard are the reason why I didn’t give this book 5 stars, but I couldn’t give it less than a 4 because everything else was handled brilliantly.

It was really informative seeing how rape cases are dealt within a college. Wrecked showed every step of the progress from the report to the trial (or lack thereof). It really brought to light how the victim in rape cases are treated. I honestly got so angry having to see Jenny constantly try and prove and justify herself whilst Jordan was automatically believed to be innocent. It was interesting seeing the way other students of the college reacted to what was happening. The ending was heartbreaking and devastatingly realistic. There was also a great discussion on consent. I found myself tearing up during so many points of this book because it’s just not fair.

It’s hard to say anything more because the book heavily focuses on the case surrounding Jenny. I think it’s important to experience the ups and downs of it yourself, without prior knowledge, as it really helps drive across the point the book is trying to make. I think it’s a book everyone should read.

Flynn’s girlfriend has disappeared. How can he uncover her secrets without revealing his own?

Flynn’s girlfriend, January, is missing. The cops are asking questions he can’t answer, and her friends are telling stories that don’t add up. All eyes are on Flynn—as January’s boyfriend, he must know something.

I received an ARC of this via Pan Macmillan and Netgalley in exchange for an honest review.

Last Seen Leaving is Gone Girl meets Looking For Alaska and I absolutely loved it. Even though it is a much more tame version of Gone Girl, for me, it got everything right that the latter got wrong – especially the ending.  It’s honestly so hard to review this book because basically everything is a spoiler, but I’m going to try my best!

Flynn’s girlfriend, January, has gone missing and on top of being a suspect in the investigation he’s also struggling with his sexuality. One of the things I loved about this book is that there was no absent parents and Flynn’s parents were also extremely understanding and progressive. Flynn was a really likable main character and I really enjoyed being in his head. He was easy to connect with and had the perfect amount of sarcastic humour that I love without it being overbearing. I even liked the slight bit of romance we had in this book, which is rare for me.

January is an enigma almost. A lot of you aren’t going to like her. She’s the kind of complex that can appear as pretentious. If you weren’t a fan of Alaska Young then chances are you won’t be a fan of January either. However, I loved her. I found her so incredibly fascinating and I couldn’t get enough of her and the glimpses we got on her life and personality.

I can’t recommend enough that you go into this book blind. The mystery is one of the best parts. It was such a page turner and I was constantly second guessing myself. I can normally predict thrillers, but this one had me guessing until the very end. Every time I thought I figured it out things got turned upside down. It can be very vague at times, but again that’s something I love. It’s equality character and plot driven. We meet so many people along the way that all have a part to play in January’s disappearance and it’s intertwined brilliantly.

Last Seen Leaving has everything I love in a book diverse and complex characters, a brilliant mystery and and a ending you don’t see coming. If you’re a fan of thrillers or want to try reading your first one then definitely check this out. I can’t wait to see what Caleb Roehrig writes next!

Have you read Wrecked or Last Seen Leaving? Are they on your TBR?