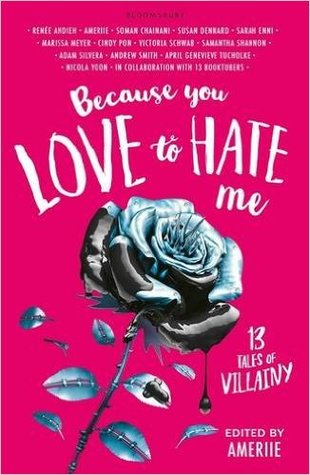 Leave it to the heroes to save the world–villains just want to rule the world.

In this unique YA anthology, thirteen acclaimed, bestselling authors team up with thirteen influential BookTubers to reimagine fairy tales from the oft-misunderstood villains’ points of view.

These fractured, unconventional spins on classics like “Medusa,” Sherlock Holmes, and “Jack and the Beanstalk” provide a behind-the-curtain look at villains’ acts of vengeance, defiance, and rage–and the pain, heartbreak, and sorrow that spurned them on. No fairy tale will ever seem quite the same again!

Trigger warnings: Violence, death, rape and victim blaming (happens in Beautiful Venom), drugs and mind control (happens in You, You, It’s All About You)

Thank you Bloomsbury Australia for providing me with a copy of this book in exchange for an honest review.

I know there were very mixed feelings about this book from the start because popular BookTubers were going to be collaborating with authors. I was really excited though because it was featuring some of my favourites (on both ends) plus I just really, really, really love villains. Sadly, I was left feeling disappointed and unsatisfied with this anthology.

If your expecting to come across some Umbridge-esque villains in this then you’re going to be very disappointed. This anthology focuses more on the morally grey. I absolutely love anti-heroes so that didn’t worry me too much. It would have been nice to get some Straight Up evil characters though and I know a lot of people are probably going to be expecting that.

My biggest problem with this short story collection is that it was just so incredibly lackluster. I rated 8 of the 13 stories 3 stars and under. I didn’t feel anything – besides boredom for the majority of these stories – and that’s not good when you’re writing morally grey characters. Some of my all time favourite characters fit into that category (Luke from Percy Jackson and Holland from Shades of Magic) and they continuously tug on my heartstrings. Just writing their names is getting me emotional. I didn’t have that response at all to any of these stories (except a couple). I know it’s harder when it’s a short story compared to a series because we don’t spend as much time with the character. That said, I feel like in short stories that emotion needs to hit harder and faster and sadly it missed the mark.

To no one’s surprise I absolutely LOVED Adam Silvera’s story (You, You, It’s All About You – superhero/villain story with the focus being on the villain who creates mind altering drugs). My other favourite story from this collection was Nicola Yoon’s (Sera – female war goddess). This was the first thing I’ve read by Nicola Yoon and I really want her to write a SFF novel now! Victoria Schwab’s (Death Knell – Hades retelling), Cindy Pon’s (Beautiful Venom – Medusa retelling) and Ameriie’s (Jack – Jack and the Beanstalk retelling) were the only others that I enjoyed. They all wrote complex characters who actually had some depth.  They were the only stories that really showed some of the complexities of what being a villain is. Other stories like Shirley and Jim (Sherlock retelling) and Gwen and Art and Lance (A mash up of a Merlin retelling and Hades and Persephone told via text and email) made me want to fall sleep. I wanted to love Marissa Meyer’s little mermaid retelling (The Sea Witch) but it fell short. The rest of the stories didn’t really register with me at all.

I originally thought the BookTubers were co-writing the stories with the authors, but all they did was suggest ideas. Then after each story there’s a little antidote from the BookTuber. I kinda didn’t care about most of them. Some were interesting, but mostly they felt unnecessary and a little repetitive?

One thing to note is that this anthology features a range of diverse authors, which is always great to support. The stories themselves lack a bit of diversity though. The only POC rep is in Cindy Pon’s and Nicola Yoon’s stories and there’s no LGBTQIA+ rep.

Here are my individual ratings for each story:

Because You Love to Hate Me had all the makings for an INCREDIBLE anthology, but unfortunately it just fell short.

Have you read Because You Love to Hate me or is it on your TBR?

20 thoughts on “Review: Because You Love to Hate Me edited by Ameriie”