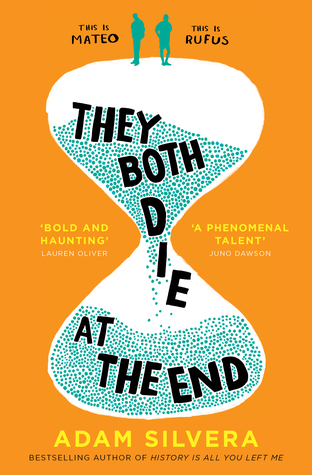 When Mateo receives the dreaded call from Death-Cast, informing him that today will be his last, he doesn’t know where to begin. Quiet and shy, Mateo is devastated at the thought of leaving behind his hospitalised father, and his best friend and her baby girl. But he knows that he has to make the most of this day, it’s his last chance to get out there and make an impression.

Rufus is busy beating up his ex-girlfriend’s new boyfriend when he gets the call. Having lost his entire family, Rufus is no stranger to Death-Cast. Not that it makes it any easier. With bridges to mend, the police searching for him and the angry new boyfriend on his tail, it’s time to run.

Isolated and scared, the boys reach out to each other, and what follows is a day of living life to the full. Though neither of them had expected that this would involve falling in love…

Thank you Netgalley and Simon & Schuester Australia for providing me with a copy of this book in exchange for an honest review.

I’ve been struggling with how I want to write this review ever since I finished They Both Die at the End back in June because it’s honestly one of my new all time favourite books. It had such a personal impact on me that it’s so hard to truly convey in words.

When I first started reading They Both Die at the End it gave me a lot of anxious thoughts. It made me realise how much I haven’t accomplished in my life. It was kind of disheartening and I wasn’t sure if I would be able to finish it. However, I pushed through and I’m so glad I did because this isn’t a story about dying – it’s a story about living. This book made me want to keep living and some days that’s really hard. It inspired me to get better. It’s honestly a huge part of the reason as to why I pulled myself out of the slump I’d fallen into. It’s why I started trying to find a job and decided I need to go back to the doctors to sort out my mental health issues.

On a less personal note the story itself is just brilliant. Adam Silvera always manages to blend sadness and humour together in such a perfect way. This book will probably make you cry, but it’ll also make you laugh. Despite only having known each other for 24 hours in no way does the relationship between Mateo and Rufus seem like instalove. Y’all know how hard it is for me to get on board with romantic love, but I was totally in love with the connection Mateo and Rufus had. I spent the entire book hoping and hoping that the story would end definitely. When I got to the end I immediately wanted to reread the book because I thought just maybe this time it’d be different. Normally in cases where death is promised I sit there like “so is this actually gonna happen or what?” and when it doesn’t I’m really annoyed. Like y’know when TV shows promise a main character is going to die but it turns out to be some random side character you saw once or twice? That pisses me off. However, with this book I really, really, really did not want the inevitable to happen and I think that says a lot.

World building wise, if you’re the type that requires a lot of explanation as to why things are a certain way then this might be a bit off putting for you. You’re just kind of thrown into a world where it’s accepted that people get a phone call when they’re going to die. There’s no backstory as to why or how Death Cast works. You kind of have to suspend your belief a bit, which I love but I know some people have a harder time adjusting so heads up!

There’s also a lot of important diverse aspects in this book. It’s an #ownvoices M/M romance. Mateo is Puerto Rican and gay and Rufus is Cuban-American and bisexual. This book also touches on topics like teen pregancy/single mothers and treats it with the respect it deserves.

I honestly can’t recommend this book enough. It gave me all the best kind of feelings.

“Maybe it’s better to have gotten it right and been happy for one day instead of living a lifetime of wrongs.”

Have you read They Both Die at the End or is it on your TBR?

31 thoughts on “I’m Literally Still Crying // Review: They Both Die at the End by Adam Silvera”