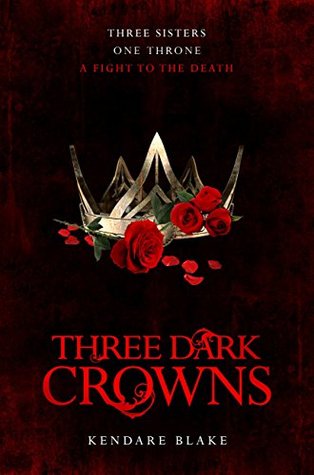 Three sisters. One crown. A fight to the death.

In every generation on the island of Fennbirn, a set of triplets is born: three queens, all equal heirs to the crown and each possessor of a coveted magic. Mirabella is a fierce elemental, able to spark hungry flames or vicious storms at the snap of her fingers. Katharine is a poisoner, one who can ingest the deadliest poisons without so much as a stomachache. Arsinoe, a naturalist, is said to have the ability to bloom the reddest rose and control the fiercest of lions.

But becoming the Queen Crowned isn’t solely a matter of royal birth. Each sister has to fight for it. And it’s not just a game of win or lose . . . it’s life or death. The night the sisters turn sixteen, the battle begins.

The last queen standing gets the crown.

** I was provided with a free copy of this book via Pan Macmillan Australia in exchange for an honest review. **

The island of Fennbirn is surrounded by mist and in every generation a set of triplets are born there. The triplets are all equal heirs to the crown and have their own set of magical powers. Katharine is a Poisoner and can create and ingest deadly toxins without fearing death. Mirabella is an Elemental and can control storms or fire. Arsinoe is a Naturralist and has the power to make plants grow and can have a strong familiar bond with any kind of animal. Only one sister can be queen and this is decided by one sister killing the other two. For centuries the Poisoners have ruled Fennbirn and it’s expected to be no different this time, however that all changes when it’s revealed that two of the sisters aren’t nearly as powerful as they’re supposed to be.

I wanted to love this book. Kendare Blake’s Anna duology is one of my absolute favourites so I was really excited for Three Dark Crowns. The blurb promised darkness and murder and unfortunately we only got handfuls here and there. It was like Gossip Girl in a Fantasy setting which is fine, but that’s not what I was lead to believe this book would be and thus resulted in me being pretty disappointed.

I wasn’t able to connect to any of the characters and I think this is because there were so many side characters. Like. So. Many. I can’t even remember all of their names. This is a very political based Fantasy so it was to be expected, but it felt like I had jumped into this book in a middle of the series. I was so lost trying to keep up with everyone and everything. I really wanted to fall in love with Katharine, Mirabella or Arsinoe and root for one of them, but in all honesty I didn’t care what happened to them. I feel like Katharine was the most interesting, but mostly because the Poisoners were such high players in the world having ruled it for so long. When we were in Arsinoe’s perspective her best friend, Jules, was more of a main character than she was. This book is in third person multi-POV so we jump around a lot. I do really enjoy multi-POV stories and each character did have a unique voice.

Three Dark Queens
are born in a glen,
sweet little triplets
will never be friends.

Three Dark Sisters
all fair to be seen,
two to devour and
one to be Queen

I especially didn’t care for any of the love interests. This book was Instalove central. Three Dark Crowns also did something I absolutely loathe even more than love triangles: <spoiler: highlight to read>cheating was seemingly romanticised</spoiler>. Katharine’s love interest was one of those male characters that we’re suppose to love, but I just found to be a total creep. The only relationship I didn’t mind was Arsinoe’s relationship with a suitor from the mainland. I feel like this was the only relationship in the book that actually had any kind of development.

What I did like, however, is that how many female characters were presented. In this book women are the ones in a position of power – not men. Katharine, Mirabella and Arsinoe are all surrounded by female friends. I loved the bond the naturalists had with their familiars too.

I did find the magical system and the concept of Fennbirn interesting, but the world building was extremely lacking. As I said above I felt so lost because there was minimal backstory. We were told but not shown. There were priestess and high councils and all different terms involving past Queens and triplets born onto the island. I could not keep up with it. The most contradicting thing is that even though there was so much going on – nothing actually happened until the last 1/3 of the book. <spoiler: highlight to read>There was no murdering between the sisters. They didn’t even START trying to compete for the crown.</spoiler> I completely understand that this is the first book in a series so it’s setting everything up, but it felt like nothing was actually set up.

I really enjoyed the sprinkling of darker elements that we got throughout this book. I feel like that’s what Kendare Blake does best. When this book was dark it was really dark. Some of the things that happened were so messed up and I just WANTED MORE, but that was put on the back burner so we could focus on two side characters romance instead. Sigh.

The final third of this book was definitely where things picked up. Everything started to become fast paced and action packed. There were reveals that I was genuinely not expecting and I’m pretty good at calling plot twists in YA. The reveals and ending does give me a lot of hope for the second book – I’ll definitely be picking that up.

“I want revenge and then I want my crown.”

I feel like you could potentially enjoy this book a lot more if you go in knowing that “a fight to the death” is 100% completely misleading. Three Dark Crowns had so much potential to be an incredible start to a series, but unfortunately it didn’t quite deliver. It did pique my interest enough to want to continue with the series though which is why I’m giving it 3 stars.

Have you read Three Dark Crowns or is it on your TBR?