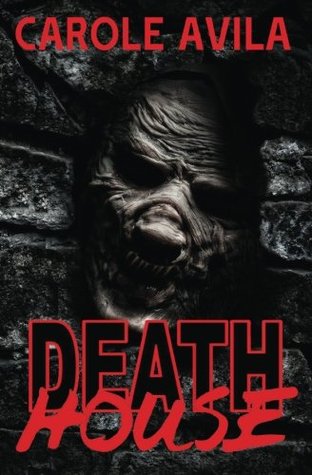 Fifteen year-old Adley is on a terrifying journey! She has yet to learn that something sinister haunts her grandmother’s old mansion, or that it hides in a dark portal beneath her bed. The demonic being born of a generational curse does more than negatively affect Adley’s mood—it kills the first born child in each succeeding family by their 16th birthday—and Adley’s birthday is just around the corner! She meets seventeen year-old Victor Trumillo, a descendant of the original victim, and only he can destroy the hideous creature. Victor and Adley want to end the curse and save future lives, but will they succumb to fear just as they may have discovered real love.

(Yes, you read right. I’m posting a review! Of a book that I’m supposed to be reading and reviewing! Trust me, I’m more shocked than you are.)

Thank you to Carole Avila for providing me with a free e-arc copy of this book in exchange for an honest review.

Death House tells the story of Adley and her parents moving into her grandmother’s Spanish Manor, also known as Capilla Manor, in the middle of nowhere in New Mexico. Her grandmother recently passed away and Adley’s parents decided to spend the Summer there to fix the place up.

Adley soon discovers that there is an unfriendly entity in the house who is persistent in trying to make sure she doesn’t live to see her sixteenth birthday. With her parents dismissing her, Adley turns to a boy she meets, Victor, for support. She learns that Victor and his family’s ancestors were the original recipients of the curse which backfired onto her family. With Victor and his family’s help Adley sets out to destroy the creature and curse that has plagued her family for centuries.

Death House is a really unique spin on the “haunted house” genre. I went into this expecting ghosts, but instead I got a really interesting tale combing Spanish and Gypsy elements. It was refreshing seeing the entity that haunted the house be a monster of sorts instead of just an evil ghost (which you know, I’m also down with – it was just cool to see something different). I loved learning about the history of the curse and how it was originated.

For the first part of this book Adley drove me crazy. She was so incredibly annoying. I started to wonder how much I was going to enjoy this book because she would throw childlike temper tantrums over the simplest of things. However, as the story continues Adley fully acknowledges how difficult she’s being and she admits that she wants to stop but doesn’t seem to have any control over her moods. Then once you get to the end of the book you understand why Adley has been so irritable and I definitely appreciate how well Carole wrote that into the story. Especially when you stop and think that Adley is only 15 and what she’d been going through.

I also liked that Adley’s parents got a voice in this. It’s rare that we ever see parents in YA. I wasn’t a huge fan of them for most of the book though. They constantly dismissed Adley and acted as though she was being a huge inconvenience. I know telling your parents that a skeleton is trying to kill you isn’t the most sanest stories, but it was visibly described in the book how shaken and terrified Adley was by what was happening and her parents just seemed annoyed instead of actually stopping and considering that maybe there was more going on. At the end of the book they do acknowledge their wrongdoings, so that’s something.

It was why I didn’t mind so much that Adley and Victor’s relationship was pretty instalove-y. Taking into consideration that Victor was the only person who Adley had to lean on for support and who believed her it’s understandable that she would grow close to him quickly. I actually found myself thinking they were really cute at various points through out the book. I also like that even though they did form a relationship quickly it wasn’t “love at first sight”. It’s rare that I find romances cute – it’s why I avoid romantic contemporaries – but I couldn’t help but smile at some of their scenes together. Adley became a much happier person when she was around Victor and she definitely deserved that.

I also found Victor’s family so incredibly interesting and I wish we had the chance to learn more about them. I also would have liked to known a bit more about the creature and how the portal in Adley’s room worked, but that could just be me and my excessive need for history and details.

When Adley and Victor faced the creature to end the curse it was very intense and kept me on the edge of my seat. I don’t think I’d ever be able to look a demonic skeleton in the eye that I knew could kill me. So major props to Adley’s bravery. She grew up a lot in this book and I actually felt rather proud of her. Almost like she was my little sister. I had times where all I wanted to do was keep her safe and give her the biggest hug – especially when her parents weren’t there for her.

The preface for this book was so chillingly creepy, it definitely hooked me in. I read it in be d at night and it talked about things grabbing your feet if they weren’t under the blankets and I actually subconsciously drew my knees up to my chest.

Death House was a fast paced read that will make you want to keep turning pages to see what becomes of Adley’s fate. I definitely recommend this if you’re a horror fan and want a different take on the whole haunted house trope.

Thanks again to Carole for letting me read this! I really enjoyed it. You can find out more about Carole and her other books here.