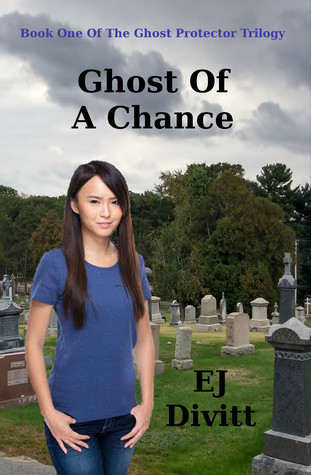 No one told Jenny Chang that she is descended from a long line of supernatural protectors. When her father is murdered, the mantle of Protector passes to her.
Suddenly thrust into the world of the dead and beholden to Zhong Kui, the King of Ghosts, Jenny struggles with new powers and new responsibilities. As she tries to find her way, Jenny must face an old evil that is loose in the world and uncover a secret buried in her family’s past.

I was provided a copy of this book by the author in exchange for an honest review.

Ghost Of A Chance is about an 18 year old girl named Jenny whose father has recently died. She discovers that her father wasn’t entire truthful about his career and he was a lot more than just a Police Officer – he was a Protector. A Protector is someone who helps and protects the dead. Being a Protector is a family tradition and now that Jenny’s father is no longer alive the title is passed to her. There’s one problem though – Jenny has absolutely no idea that this world even existed.

If a book has ghosts and diversity then it’s an automatic must-read for me. It’s hard for me to find paranormal books that I enjoy because they normally always heavily focus on romance which is not what I’m looking for and it’s why I normally read from the horror genre. Sometimes, I just want a lighthearted book though. Or one where the ghosts or paranormal creatures aren’t all evil ect.  I often find myself asking: “Can”t someone just write a book about ghosts and legends and friendships that doesn’t involve any romance?” Well fortunately E.J. Divitt answered my prayers. I’m so glad she contacted me about this book because otherwise I would have had no idea it existed. Not only does Ghost Of A Chance have zero romance (there’s a scene with some boys, but more on that later) it also focuses on Chinese mythology and the MC is Chinese.

Ghost Of A Chance  was such a fun (well to a degree, but more on that later), quick and fast-paced read. You all know I’m all about that quick pacing because of my attention span. The chapters are short, but not necessarily rushed and it made me want to keep reading to find out what was happening. I couldn’t put the book down and if I didn’t have real life get in the way I would have easily finished this in one setting.

You may possibly feel frustrated whilst reading this book, but I don’t mean that in a negative way. I mean you will empathise with Jenny and feel her frustrations. This book is similar to a concept used in The Maze Runner in which we literally have no idea what is happening along with the MC. We find out as they find out. I felt so angry on Jenny’s behalf because NO ONE would tell her anything. The only way she started to learn anything was because her Aunt who is one of the main antagonists was leading her to the truth in a manipulative way. Her mother would get angry at her for things beyond her control and when she started seeing her father’s ghost even he wouldn’t explain anything. She was completely on her own. I really love her as a character though. I think she was really strong and human. Jenny also develops a great relationship with her estranged Grandmother. I loved seeing this because I was extremely close to my Grandmother.

“No one is nothing. Everyone has a place and a purpose. Some choose their purpose and others have it thrust upon them but no one is useless. Everyone is someone. The world has use for us all.”

Jenny’s father says the above quote and I fell in love with it. I think it is such an important message. I just had to share it with everyone!

The first half of this book is really lighthearted and some really funny moments that made me laugh out loud. Jenny has the cutest relationship ever with her little brother Tommy. I absolutely adored this so much. I feel like sibling relationships aren’t really always explored in YA. They’re either non existent or it’s negative. I was really happy to see the way Jenny interacted with Tommy. The second half of the book things got a lot darker. I don’t want to give spoilers but Jenny’s mother does something that is for me unforgivable. I can see her reasoning, but that doesn’t mean I have to agree. I also feel like I need to warn anyone who reads this book that there is a brief rape and suicide scene. This what I was referring to above about ‘more on that later’ with the boys. Jenny’s friend Beth organises a double date and again I don’t want to spoil it, but it turns out one of the boys is connected to a murdered girl that Jenny needs to help. The scenes are only a few pages and not extremely graphic (it is suitable for a Young Adult audience), but it completely caught me off guard and I don’t want anyone to be triggered. Despite, the darker turn I still enjoyed the book a lot.

I feel like the ending was a bit rushed, but it still resolved most things. I really loved learning about Zhong Kui and the Chinese mythology. The writing was straight to the point, which I liked but it may not be for everyone. There was a few formatting errors in the ebook, but nothing that really bothered me. My original thought for this book was 3.5 stars and I decided to round it up to a 4 because I just thought it was a breath of fresh air to the Paranormal genre. It may not be The Best Book Ever but I don’t care and neither should you. If you like Paranormal and are after a simple read then make sure to pick this book up! I’ll definitely be checking out the rest of the series! The second book Ghost Of A Smile is available here.

Thanks again to E.J for providing me with a copy of this book! You can find more about E.J. Divitt here at her website.

4 thoughts on “Review: Ghost Of A Chance (Ghost Protector #1) by E.J. Divitt”