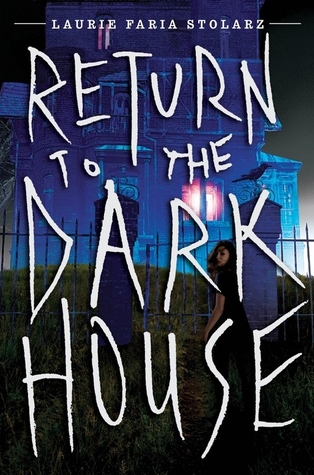 Ivy Jensen survived the Dark House once, but can she make it out a second time?

Two months have passed since Ivy narrowly escaped the Nightmare Elf’s grip, but the memories of Parker, Natalie, Shayla, Frankie, and Garth continue to haunt her. Their killer is still out there—somewhere. The police trail has gone cold, though, and it’s up to Ivy to piece together the clues to find him.

When a cryptic video arrives in her inbox, Ivy soon finds herself back in the spotlight, this time on a twisted scavenger hunt through the dark, ancient halls of a long-forgotten Gothic school building. Ivy’s not alone, either. Taylor Monroe has returned to the scene. But can Taylor be trusted? Or is she another pawn in the Nightmare Elf’s deadly game?

Laurie Faria Stolarz crafts a mesmerizing thriller that will leave readers looking over their shoulders.

Return to the Dark House is the follow up of Welcome to the Dark House and it does a fantastic job of continuing Ivy’s story. If you’re a fan of young adult horror (or fun horror movies) and fast paced, edge of your seat books then this series is an absolute must read.

The Dark House series suits all my horror needs. A badass heroine. A human psychopath. Murder. Abandoned locations. Psychological. Possible paranormal elements. What more could you ask for?

It’s been a really long time since I’ve read a book and more importantly, since I’ve read a book in under a day. Return to the Dark House was however able to capture my non-existent attention span and I could not put it down. It was fast paced, action packed and I love that again, like the first book, it was in multiple view points. It definitely kept me interested.

In the follow up Ivy is convinced the rest of the contest winners are still alive, even though none of the authorities are willing to listen and she starts to receive clues that further strengthens her belief in this. She teams up with Taylor, a girl who escaped the Dark House before the rest of the contest winners arrived, to track down the killer and save everyone. One of my favourite parts of this book was Taylor’s and Ivy’s friendship. It was so beautifully written. It would have been so easy for Ivy to shame Taylor like the rest of the world did, but instead she showed extreme empathy and befriended her. I loved Taylor [spoiler: highlight to read] and I’m very sad about her possible fate[/end spoiler]. I’m not a romantic so I didn’t really obsess over Ivy’s devotion for Parker, but I did love how loyal she was to him and everyone else. She was willing to risk her own life to save almost strangers and why some may see that as stupid and reckless I found it incredibly selfless and brave.

I’m a sucker for abandoned places and I loved that the first book was set at an abandoned amusement park, but even more that this was set at an abandoned school in the middle of the woods. The setting was so vivid. I don’t really get scared by horror books, but imaging being in Ivy’s situation, because of the location, was definitely exhilarating. I loved the psychological elements of the possible paranormal phenomenons that were taking place because there was no confirmation of whether they were real or not so it definitely started to mess with my head a bit, which I loved. I liked learning more about the killer and thought the journal entries were a super neat idea.

A much as I loved this book there were a few moments of frustration for me, but that’s to be expected with the horror genre. Every time Ivy refuses to go to the police you’ll probably curse under your breath, but I feel as though she truly believed she had no other choice. I can’t even begin to imagine what I would do if I was in Ivy’s situation. [spoiler: highlight to read] I wish Ivy had been able to get some definite closure instead of the Nightmare Elf who subsequently, is the same man who murdered her birth parents, escaping again.[/end spoiler] It would have been good to know why the killer chose to target Ivy and her parents. Was it random? Did he know them? Why was he so obsessed with Ivy? The small glimpse of his past didn’t answer any of the questions. My need for answers definitely contradicts my love for the horror genre, haha. [spoiler: highlight to read]I would have liked to know if the rest of the contest winners are alive considering only Parker and Natalie were found by the end of the book.[/end spoiler]

I read that there aren’t any current plans for a third book which I think is a shame because I feel as though a lot of the loose ending and unanswered questions could be solved in a third and final installment. Also for selfish reasons because I really want to read more of this series. I feel like this book would make a great TV show or movie. [spoiler: highlight to read] I guess at least this way though I can pretend that the rest of the contest winners and Taylor are all safe and happy. Hey, I can dream, right?     [/end spoiler]

One thought on “Review: Return To The Dark House (Dark House #2) by Laurie Faria Stolarz”